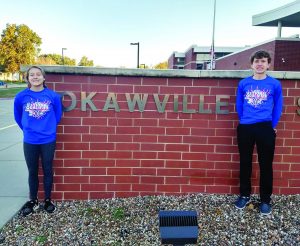 In what will hopefully be the only cross country season held during a global pandemic, two Okawville Rockets finished the 2020 season at the Althoff Sectional Saturday.

Grant Schleifer and Cindy Snyder competed in the final race of a season truncated by the COVID pandemic that has affected just about every facet of daily life.

“Cindy and Grant battled through everything that was thrown at them during the season with COVID,” Okawville coach Val Tepe said. “Training was not the same as previous years, competition wasn’t the same and yet they came out and gave it their all at every single meet.”

Schleifer would have qualified for state in a normal year with his finish in Belleville. The top six teams and top ten individual finishers advance, and Schleifer finished 21st overall with a time of 17:46.

“It was difficult to prepare not knowing if there would be a post-season and would be easy to slack off at meets but Cindy and Grant are true competitors and it definitely shown,” Tepe said.

Saturday’s race marked the end of a difficult season that proved trying from the start. “The beginning of the season was a roller coaster with having practices to not having practices, the uncertainty if we would even have a season, and if so, how long would it last,” Tepe said.

Once the season began, the team was able to participate in only about half of the meets as in a normal season. Runners were unable to compete against teams from other schools that they normally do, including Nashville, Pinckneyville and DuQuoin.

“They battled through everything that was thrown at them as well,” Tepe said of her team. “I told the team at the last regular season meet that I am very proud of every single one. This year has been completely different than any other year.”