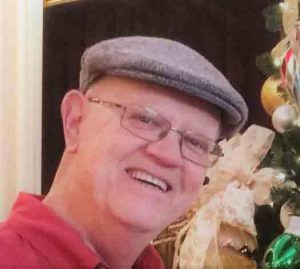 Clifford was born in St. Louis, MO on October 22, 1947 the son of Clifford Sr. and Betty (nee Stephenson) Kuhn. He was united in marriage to Cindy Roth in the St. Peter’s Cathedral in Belleville, IL on May 13, 1972 and she survives his passing.

Chip was a 1965 graduate of Okawville High School where he was a member of the basketball team. He then attended Belleville Area College for two year before enlisting in the United States Air Force in 1967. While in the Air Force, Chip was stationed in Thailand and at Scott Air Force Base as a telephone operator. He was honorably discharged in 1971 having attained the rank of Sergeant. He was awarded several ribbons and medals including the National Defense Service Medal, Vietnam Service Medal, and a Small Arms Marksmanship Ribbon.

Chip was a rural mail carrier for the United States Postal Service from 1979 until his retirement in February of 2013. It was well known in Okawville that if your mail was late or got lost, Chip probably had something to do with it. He was a member of the St. Barbara Catholic Church in Okawville. He was also a member of VFW Post 5596 in Okawville, the Okawville Lions Club and he had previously served on the Okawville School Board. He was a former member and past President of the Okawville Jaycees. Chipper was particularly involved with youth sports programs in Okawville. He previously served on the board of the Okawville Youth Association. He also coached and umpired countless Little League ball games and grilled many a brat and hot dog for various summer tournaments. Chip also helped to start the pee wee basketball program in Okawville. He was an IHSA official and refereed many high school, junior high and grade school basketball games over the years. Chipper was an avid fan of all Okawville Rockets sports and could often be seen, and especially heard in the stands, rooting on the Rockets. He lived for Okawville Rocket basketball and rarely missed a game. He loved playing cards and any games with his family. He was an avid golfer, though not a good one, and played in the Thursday night league at the Okawville golf course. He also enjoyed being outside and doing yard work. Chip was one of a kind and will be missed by all who knew him.

Left to mourn his passing is his wife Cindy Kuhn of Okawville; two children, Jason Kuhn of Okawville and his special friend Carrie Hall, and Jodi Kuhn of Okawville; a sister, Judy Hackstadt of Nashville; a brother-in-law, Raymond “Butch” Hugyez of Mesa, AZ; two sisters-in-law, Betty Eads of Houston, TX and Janice Hugyez of Waterloo, IL; numerous nieces, nephews, great nieces and great nephews, cousins as well as a host of friends.

In addition to his parents, he was preceded in death by his in-laws, Robert and Melba Roth; three brothers-in-law, Gary Hackstadt, Robert Hugyez, and Harry Eads; a sister-in-law, Loise Hugyez; and three nephews, Tanner Hackstadt, Matthew Hugyez, and Brandon Hugyez.

A public visitation will be held at the Campagna Funeral Home in Okawville on what would have been Chip’s birthday, Thursday, October 22, 2020 from 11 A.M. until 2 P.M.

Due to Covid-19 health concerns, a private service for the family will be held at the Campagna Funeral Home on Thursday following the visitation. Interment will be in the St. Barbara Cemetery with military graveside rites accorded by American Legion Post 233 of Okawville. During the service, the family encourages friends to meet at the Roland Barkau Memorial Golf Course in Okawville to wait for them to arrive, to enjoy a time of food and fellowship and an opportunity to celebrate the life of Chip Kuhn.

In lieu of flowers, memorials may be made to Evelyn’s House/BJC Hospice or to the Okawville Community Youth Association and will be accepted by the Campagna Funeral Home.