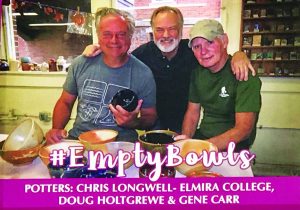 Doug Holtgrewe’s 14 years of creating ceramic bowls for the Empty Bowls program in Elmira, NY is on a physical hiatus this year due to COVID-19.    The former Elmira College art and art history professor, other artists and students make at least 300 unique bowls each year for the event that raises money to provide food and rental assistance for those in need.

The retired professor said that he can’t remember a time when he wasn’t interested in making art. His mother, Bonnie, told him that he was drawing from the time he was in a high chair. Doug, his parents Roy and Bonnie Holtgrewe, and his brother, Charlie, lived in Addieville.

Holtgrewe, a 1962 graduate of Okawville High School, attended Southern Illinois University at Carbondale (SIUC) where he majored in art. His college studies were interrupted in 1966 when he was drafted into the military during the Viet Nam War era. He chose to enlist in the Navy, as did his father who served in World War II. Doug served on the destroyer USS William R. Rush out of its home port, Newport, RI. The ship and its crew, among their other duties, hunted Russian submarines in the North Atlantic and Arctic oceans as well as the Caribbean and Mediterranean seas. After four years in the Navy, Doug returned to SIUC to complete his bachelor’s degree in art and then a Master of Fine Arts in ceramics and glassblowing.

During the summer of 1974, he learned of a college teaching position in Elmira, NY from a fellow SIUC graduate who had just been hired there. He applied for, got the job and moved to Elmira in August. The position involved teaching ceramics, drawing and art history, primarily to residential undergraduate students.