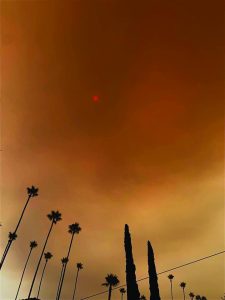 Timothy Habrock’s view of the smoke from his California home on a “sunny day”.

Former Lively Grove resident Tim Habrock could see the flames from wild fires at his home in Azusa, California. When the fires were 2 1/2 miles from the Habrock house, they crested at a ridge and headed towards the foothill communities, away from Azusa.

The Habrock family of his wife, Chrissy and son Lukas did not have to evacuate their home 25 miles east of Los Angeles.

Although the fire is no longer visible from the Habrock home, on some nights they can see the orange glow from behind the ridges.

Habrock said the fire is advancing in all four directions, but mostly to the east and west to the foothills and forest. 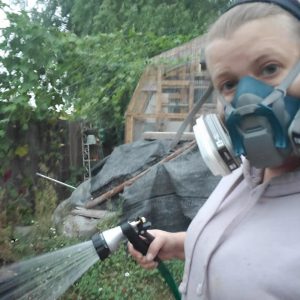 Melissa (Reeder) Jensen waters her garden wearing an N-95 mask because the smoke has made the air dangerously toxic in Oregon.

Air quality is extremely poor, with the ever-present smell of smoke, Habrock said. Some days ash falls like snow. On the very worst days the smoke in the sky is the color of burnt amber, which mostly blocks the sun and gives everything an orange tint. “It looks like a perpetual twilight that lasts all day,” Habrock said.

Read more resident stories in the full article in this week’s issue.