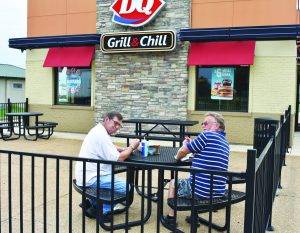 Occupancy at the Super 8  was only 25 percent in the summer, said owner Bob Patel. That is far below the 75 percent average for a typical summer, he said.

Sales were down over 10 percent at the Burger King, said Vice President of Regional Operations Robert Bird. He declined to be more specific, but did say that the local BK was trending down more than any of its 60 franchisees in the Illinois and Missouri region.

Dairy Queen sales were down ten percent July, but actually up in August compared to a normal year, said owner Kelley Gerber.

Having the dining area open, (until forced to again close September 2), helped mitigate the downturn, she said. Even when the business can’t allow inside dining, customers can come in to order and use the rest rooms, and use the outside tables. That is a big plus for interstate travelers, Gerber said.

Full story in this week’s issue.