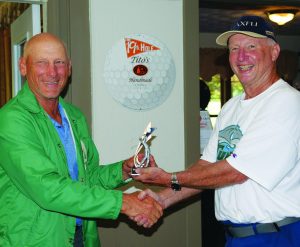 Area golfers took to the links August 25 for the annual battle for the coveted Green Jacket.  The 17th annual Frogtown Invitational was safely held at the Roland Barkau Memorial Golf Course. Golfers enjoyed an afternoon of golf and other festivities.

This year’s champion was John Schuette, who carded a net score of 23 and received  a trophy and the green jacket.