A little over three week’s ago Nashville got a new resident. Nash the potbelly pig. Nash, also known as Hammy, JB Pigster/Porkster, Little Porky, Woodsy, Chris P. Bacon and others, is living his best life near the Nashville Middle School. The pig apparently escaped from a livestock auction held by County Line Auctions at the fairgrounds around August 8. 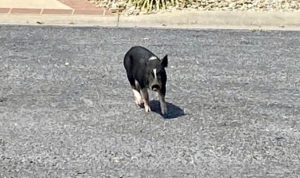 “The pig escaped as they tried to transfer him to a different cage and he’s been on the run ever since,” said Amber Lehde of Nashville. “The buyer paid five dollars for him and lives an hour and a half away. He and his wife came down  to find him, but after over two hours of chasing, were not able to catch him,” said Lehde.

Numerous others have also tried catching the quick pig. Even the Nashville Police have come to try and help corral Nash.

“We get calls daily,” says Nashville Police Chief Brian Fletcher. No complaints, just people trying to help, according the chief. “We have tried to seek him out, but from the time a call comes in and we get there, the pig is gone,” he said.

Lehde recently started a Facebook group for the pig’s fans where people can report sighting and share photos or videos of the wayward swine. To join the group and follow Nash’s journey, search for ‘NASH The Celebrity Pig’ on Facebook.