The two were playing at Governor’s Run at Carlyle when Beimfohr, 65, suffered the heart attack. Dave Shrum  administered CPR for about 15 minutes until the EMT’s arrived. Beimfohr was transported to St. Joseph’s Hospital in Breese, and then to St. Elizabeths in O’Fallon. He was hospitalized a week and underwent a procedure to have a stent implanted. 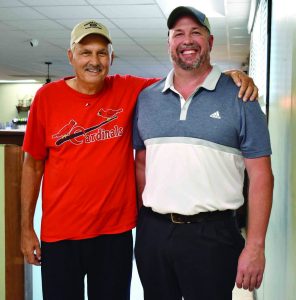 Beimfohr did not gain full consciousness from the time the heart attack occurred until two days later. He had 100 percent blockage in the main artery, “Without immediate CPR, I would not be alive today,” Beimfohr said. Dave doesn’t like accolades, but he deserves them!”