It took almost two years, but the solar array at the sewer lagoon in Okawville is up, running and generating power. 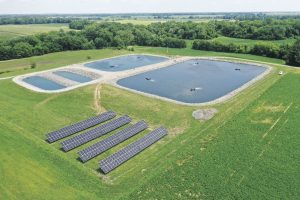 Okawville Village Board member Drew Hesker met with  a representative from Ameren Illinois last week, and the solar array is now fully operational.

“It was really good to watch the power going back into the grid after almost two years of working on the project,” Hesker said.

Originally, the plan was to build an array large enough to fully run the lagoon. That fell through when engineers realized that more lines would have had to been required in order operate the lagoon on full three–phase power.

That meant it was back to the drawing board. The new array is designed to handle about two-thirds of the lagoon’s power needs, which will result in substantial savings for the village.

Hesker says that, between the electricity savings of approximately $1,200 per month and solar renewable energy credits from the state, the array will pay for itself in six to seven years. SRECs are part of an incentive program to transition to green energy sources.

“What’s good for the village is that it’s cash flow neutral,” Hesker said. “We will use the solar energy credits and the money we used to pay in electricity costs to pay down the loan.”

Some of the costs were offset by a third-party company, which paid for a portion of the cost of building the array in exchange for capturing the Federal tax credit from the asset. At the end of six years, the array reverts back to the village.