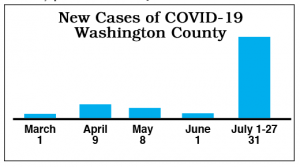 COVID-19 seemed to be under control in Washington County in June. The Health Department reported only one case, of a man in his 30’s that month.

But the loosening of restrictions that allowed restaurants and bars to have inside service apparently sparked the increase in the county in July.

In the first 27 days of this month the Health Department reported 31 cases. That was more than the total of every month since the first case was reported March 19, of a man who had traveled to Chicago.

In April, the 9 county cases were mainly health care workers.

In May, the 8 county cases were mainly health care workers, or people who contracted the virus from people they had close contact with.

The WCHD reported only one case in June.

Community spread became the main source of contracting the virus in July, according to WCHD reports. Contact tracing became more difficult because potentially many people were affected if a person with COVID-19 was at a business with many patrons or at a large party.