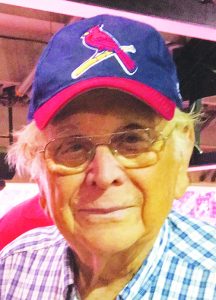 Eugene Liske of Okawville, IL departed this life in the Friendship Manor Health Care Center in Nashville, IL on Saturday, July 25, 2020 at 6:45 A.M. He had attained the age of 84 years, 4 months and 20 days.

Eugene was born on the family farm in Beaucoup Twp., Washington County, IL on March 5, 1936 the son of Charles and Helen (nee Malick) Liske and was baptized in the St. Michael Catholic Church in Radom, IL.

Mr. Liske was a 1954 graduate of Okawville High School. He served in the United States Navy as a Seabee and was stationed aboard the USS Ranger until being honorably discharged. Eugene was a lifelong farmer and truck driver and was a faithful member of the St. Barbara Catholic Church in Okawville. He loved attending auctions and was a collector of antiques and many other assorted odds and ends.

He was preceded in death by his parents.

In accordance with the wishes of the family, cremation will be performed, and a private service will be held at a later date.

In lieu of flowers, memorials may be made to the Okawville American Legion Post 233 Honor Guard and will be accepted by the Campagna Funeral Home.