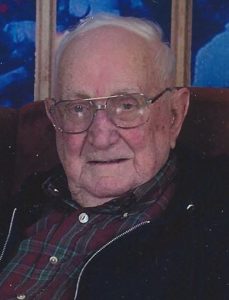 Norman was born on the family farm in Plum Hill Twp., Washington County, IL on September 5, 1928 the son of Harry and Hulda (nee Riechmann) Lehde. He was baptized and confirmed at the St. Paul United Church of Christ (White Church) in rural Okawville. Norman was united in marriage to Esther Klingenberg on January 11, 1958 in the St. John United Church of Christ in Plum Hill, IL. Norman and Esther enjoyed over 52 years of marriage until her passing on July 9, 2010.

Norman was a 1946 graduate of Okawville High School. He served in the United States Army for two years before being honorably discharged. Norman was a lifelong dairy and grain farmer, retiring from full time farming in 1993. He was a member of the Washington County Farm Bureau and sat on the board of the St. Louis Chapter of the Mid-American Dairymen Association. He was a faithful member of the St. Peter United Church of Christ in Okawville where he had previously been on the church council and had served as President of the congregation. Norman served on the Okawville Fair Board for many years and clerked for Owen Lehde at Lehde Auction Service.

In addition to his parents and wife, he was preceded in death by a sister, Lorraine Meyer and her husband Robert and a sister-in-law, Gladys Hassebrock and husband Raymond.

Funeral services will be held from the St. Peter United Church of Christ in Okawville on Tuesday, July 21, 2020 at 11 A.M. with Pastor Jeffrey Schwab officiating. Interment will be in the church cemetery.

Friends may call at the St. Peter United Church of Christ on Tuesday from 9 A.M. until the service hour.

In lieu of flowers, memorials may be made to the St. Peter United Church of Christ and will be used to support the continuation of the live broadcasts of the worship services. Donations will be accepted by the Campagna Funeral Home.