A project almost six years in the making is almost finished, as the bridge on Jimtown Road is set to reopen by the end of the month.

Jimtown Road in Plum Hill Township has been closed since construction began in 2018, but the project’s roots began four years earlier under Mitch Burdick, the county’s previous highway engineer.

“Mitch started working on this in 2014, and so we were ahead of things when the state told us the bridge would need to be replaced,” said Kiefer Heiman, the county’s current engineer.

Heiman said that projects like this take time, as the state pays a set amount into the bridge fund every year. Having the project in the pipeline proved advantageous, as a state inspector reported that the bridge was unsafe not long after. 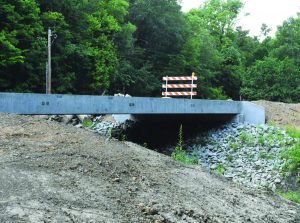 IL 160 in Okawville to be Temporarily Closed