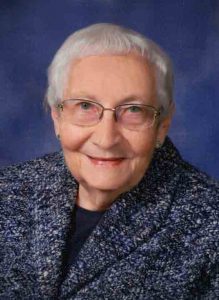 Kathryn Reinhardt, 92, passed away July 11, 2020 at Accura in Ames, IA. Due to the current COVID-19 pandemic concerns, a virtual funeral service will be held at 10 a.m., Thursday, July 16, 2020 with a private graveside service to follow for immediate family at 1 p.m. in Latimer, IA.

Kathryn Marie (Meyer) Reinhardt was born to Fred W. & Meta (Barth) Meyer on October 17, 1927, near Latimer, IA. At the age of 3, her mother died of tuberculosis and she went to live with her grandparents, Rev. & Mrs. C.J. Barth, minister at Immanuel Church, and Aunt Mildred (Barth) Trager. Kathryn attended the Marion Center Country Grade School through the 8th grade. After Kathryn’s grandparents died, she went to live with her father, who had married Margaret DeBour. They lived in Hampton, IA where Kathryn attended Hampton High School and graduated with the class of 1945. She attended Elmhurst College in Elmhurst, IL and graduated with the class of 1949; also known as “the 49ers”. Her major was Music with a minor in English. Kathryn taught music at the Franklin Consolidated School in Latimer and Coulter School for 4 years.

While at Elmhurst, she met Ed Reinhardt of Okawville, IL. They sang together in Chapel Choir and later, he came to Iowa and worked on the new Franklin Consolidated School, which was being built in the early 50’s. On August 30, 1953, Kathryn and Ed were married at Immanuel Evangelical Reformed Church; later known as United Church of Christ. They lived in Webster Groves, MO where Ed attended Eden Seminary. Kathryn taught music at a Richmond Heights, MO Grade School. After Ed’s graduation from Eden, Ed and Kathryn served five different churches in Iowa, Michigan, and Minnesota. Kathryn was an organist and choir director in all five, when needed.

When Ed and Kathryn’s children, Ann and Mark, were young, they enjoyed camping and traveling across the United States as a family. While in Hubbard, Kathryn learned to play bridge and golf. She also taught several macramé classes and enjoyed counted cross-stitch, but never did learn how to use a sewing machine. Kathryn was also an avid collector of Dept. 56, coffee cups, Lladro and Hummels. She retired in Faribault, MN and moved to Accura in Ames, IA in April, 2018.

She was preceded in death by her husband, Ed, her parents Fred and Meta, and siblings Dwight Meyer, and Janice Wright.

In lieu of flowers, memorial donations may be sent to Grandon Funeral and Cremation Care to be forwarded to Kathryn’s family.

Online condolences may be directed to: www.grandonfuneralandcremationcare.com