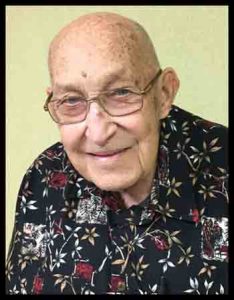 Mr. Lee Roy Borowiak of Nashville, IL, departed this life at the Washington County Hospital Extended Care in Nashville on Friday, June 26, 2020. He had attained the age of 91 years, 7 months and 10 days.

Mr. Borowiak was born on November 10, 1928 in Ashley, IL the son of Walter and Kaneth (nee Forys) Borowiak. He was united in marriage to Mary Ann Gajewski on September 26, 1955 at St. Michael’s Catholic Church in Radom, IL, and she survives his passing.

Lee found his interest for variety stores when he was 18 at the John A. Morris five and dime. He proudly served with the United States Army and fought in the Korean War. After the war Lee returned to Nashville, IL and in 1954 he started his own business called Lee’s 5¢ to $1 store and in 1989 he started Lee’s Sports which he owned and operated for many years. He was a member of the St. Ann Catholic Church in Nashville, Knights of Columbus #4384, American Legion Post #110, Veterans of Foreign Wars, Nashville Chamber of Commerce and the Nashville Community High School Sports Boosters. Lee served on the Nashville City Council, State Theater Board, Eagle Scout Board of Reviews and the Nashville Economics Development Board and was awarded the 2000 Nashville Citizen of the Year.. Lee loved sports and was a big contributor to the Park League in Nashville and he had a true passion for the Chicago Cubs.

He was preceded in death by his parents and brother-in-law.

Public visitation will be held at the Campagna Funeral Home in Nashville, IL on Thursday, July 2, 2020 from 5 PM until 8 PM. In accordance with the new guidelines provided by the state, we encourage guests to wear a mask, practice social distancing and refrain from hugs and handshakes.

A private Mass of Christian Burial will be held at St. Ann Catholic Church in Nashville, IL on Friday, July 3, 2020 with Fr. Andy Knopik officiating. Interment will follow in the church cemetery. Military graveside rites will be accorded by American Legion Post #110.

Should friends desire, mass offerings or memorials can be made to the St. Ann Catholic Church or to a charity of the donor’s choice and will be accepted by the Campagna Funeral Home.