Mr. Jason A. Quick of Hoyleton, IL, departed this life at SSM Health St. Mary’s Hospital in Centralia on Wednesday, June 17, 2020.  He had attained the age of 41 years and 1 month. 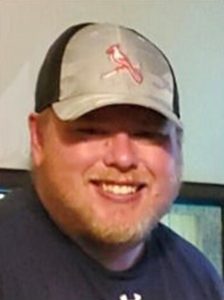 on May 17, 1979 in Centralia, IL, the son of Albert and Cathy (nee Wadkins) Quick.  He was united in marriage to Angela Grote on August 10, 2002 at the Trinity Lutheran Church in Hoyelton, IL and she survives his passing.

Jason worked as a Tool and Die Maker for Graphic Packaging in Centralia, IL for 22 years and he was a member of Trinity Lutheran Church in Hoyelton.  Jason was very involved with the Trinity Lutheran School in Hoyleton, where he coached baseball and basketball and was a member of the school board.  He also coached the basketball league at the Centralia Recreation Center.  Jason spent countless hours working on his derby cars, he was one of the Green Bay Packers and St. Louis Cardinals biggest fans and he loved the outdoors, especially hunting and fishing.

Due to the COVID-19 health concerns, a private funeral service will be held.

Should friends desire, memorials can be made to the Trinity Lutheran School or to the college fund that will be set up for his children and will be accepted by the Campagna Funeral Home, who is assisting the family with arrangements.