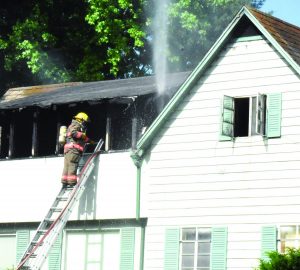 Fire ripped through apartments in a building in Nashville Friday morning.

Nashville, Addieville and Hoyleton firefighters battled the blaze for almost three hour after the first report came in at about 8:30 a.m.

The structure contained two apartments, and the fire started in the upstairs apartment and soon engulfed the entire upper floor.

According to Nashville Fire Chief Alan Hohlt, the fire appears to have started in a sun room where an air conditioner had been running due to the heat.

“There’s too much damage to say for sure, but we are pretty sure it was an electrical fire,” Hohlt said.

No one was injured, as the residents called the fire in soon after waking up Friday morning. “They were all asleep when it was started, so it was lucky they woke up when they did,” said Hohlt.