More than 100 marchers hit the streets of Nashville to protest police brutality and racism Monday night.

The protest, organized by Nashville Community High School student Janisha Bailey, began with a speech at the Community Center of Nashville at 6 p.m.

“I have a voice, and I will use it,” said Janisha, who lives in Ashley. “I refuse to let my brothers and sisters become just a statistic.”

Following the speech, protesters marched through downtown Nashville and down Mill Street to Nashville Community High School. Participants chanted, “No justice, no peace. No racist police,” “Black Lives Matter,” and “This is what democracy looks like,” during the march.

While there, protesters kneeled during a 9-minute moment of silence in tribute to George Floyd, who was killed when a Minneapolis Police Officer knelt on his neck for almost nine minutes.

Following the moment of silence, protesters marched back to CCN, where Janisha Bailey’s sister, Aaliyah, addressed the crowd.

“I’m not just here to protest  racism and police brutality, I’m here as a mother,” Aaliyah said. “I can’t imagine being a mother and getting a call that my child was dead.”

Read the full story and see more photos in this week’s issue. 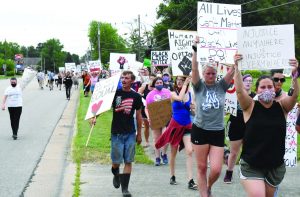