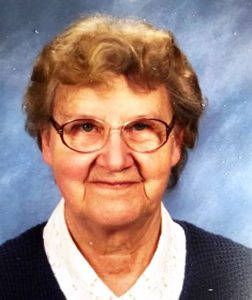 Mrs. Ostendorf was a homemaker and farm wife. A true partner working alongside her husband on the family farm, and like so many farm wives of that generation, she tended the garden, canned fruits and vegetables, baked pies and other desserts for countless fund raisers and Wurst Marts, made several quilts, and raised her children. Doris was known for her gardening. She would experiment with numerous seed varieties and tried to come up with something a little new or different each year. Mrs. Ostendorf was a faithful member of the St. John United Church of Christ in Plum Hill, where she was the last surviving charter member of the Women’s Guild. She was a member of the Washington County Farm Bureau and a former member of the Addieville Community Club. She was an avid reader and in the last several months and become quite adept at putting together jigsaw puzzles. Most of all she loved spending time with her family.

In addition to her parents and husband, she was preceded in death by a brother, Norman Kersten; a son-in-law, Ted Zbacnik; and a brother-in-law, Orville Krebs.

Due to Covid-19 health concerns, a private service will be held.

Should friends desire, memorials may be made to the St. John Cemetery or to the charity of the donor’s choice and will be accepted by the Campagna Funeral Home.