For four decades, Brad “Bo” Meyer has been bringing Nashville sports to listeners at home. Now, the voice of the Hornets is calling it a career.

Meyer announced last week that he was hanging up his microphone after 42 years of calling Nashville football, basketball and baseball games.

“I didn’t announce anything during the season, but we had talked about it before this year started, and we both agreed that this would be our last year,” Meyer said of him and his broadcast partner, Brad “Beefcake” McClay.

Though he excelled as a sports play-by-play man, calling basketball and football games was not Meyer’s original plan. 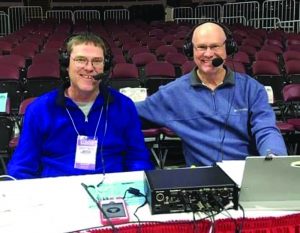 Bo Meyer, on right, and his color announcer Beefcake McClay.

“I always wanted to get into broadcasting, and my heroes were Walter Cronkite and Dan Rather,” Meyer said. “I wanted to be a foreign correspondent when I graduated from SIUC.”

Read how his path changed and his future plans, in this week’s issue.