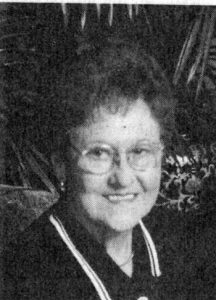 Lorraine C. Seyler, 96 of Paducah, KY formerly of Nashville, passed away at 6:23 a.m. on Monday, April 27, 2020 at Superior Care Center in Paducah.  She was born on May 13, 1023 in Nashville, the daughter of Henry and Bertha Reinhardt Holzhauer.  She married Edmund Nagel in 1942 in Nashville and he passed away in January of 1971.  Also preceding her in death were her parents and 5 brothers; Gilbert, Melvin, Milton, Virgil and Melroy Holzhauer.  Left to mourn her passing are 2 daughters; Donna (David) Hoelscher of Paducah, KY and Billie Sachtleben of Belleville.  3 grandchildren; Nik Hoelscher, Stacy Griffin and Selina Geppert. 5 great grandchildren; Abby Griffin, Kaley and Oliver Hoelscher and Korbin and Alexi Hammer.

Lorraine was the owner and operator of Lorraine’s Class and Casual store in Nashville for 30 years before retiring.  Prior to that, she had worked at Backs Department store and Lee’s Variety store both in Nashville.  She also operated a Mode O Day franchise for 14 years before that company went out of business.  She was the oldest living member of the Trinity Lutheran Church in Nashville.

A private funeral will be held at Styninger Funeral Home in Nashville with Rev. Aaron Kotila officiating. Burial will follow in the Trinity Lutheran Cemetery in Nashville.  Memorial contributions are suggested and may be made to Trinity Lutheran Church or the American Heart Association.  Since a public visitation is not possible due the Governor’s executive order of group assemblies, expressions of sympathy are encouraged and may be left on the Tribute Wall of Lorraine’s obituary at www.styningerfuneralhomes.com or on the funeral home’s Facebook page.