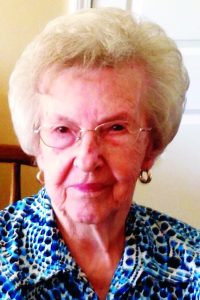 of Mount Vernon, Illinois, passed away at 1:42 am April 18, 2020 at Lavender Ridge in Mount Vernon. She was born December 13, 1923 in Covington, Illinois to the late Theodore and Clara (Wernecke) Reinhardt. Anita married LeRoy Reu on March 16, 1941 in Saint Louis, Missouri and he preceded her in death on September 2, 1994.

In addition to her parents and beloved husband of fifty-three years, Anita was preceded in death by her two sons, Lowell Reu and Robert Reu.

Anita worked at Montgomery Ward for a time then opened her own beauty shop. She was a member of Faith Lutheran Church, was dearly loved, and will be missed by all who knew her.

A Private Service will be held. Interment will take place at Mount Vernon Memorial Gardens in Woodlawn. Memorials may be made in Anita’s honor to Faith Lutheran Church.