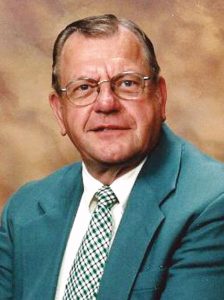 Mr. Stanley Schmidt of Okawville, IL departed this life in the Friendship Manor Health Care Center in Nashville, IL on Monday, April 13, 2020 at 5:40 P.M. He had attained the age of 79 years, 3 months and 4 days.

Stanley was born in Okawville on January 9, 1941 the son of Harry W. and Hanna (nee Detering) Schmidt. He was united in marriage to Cora Perschbacher in the Immanuel Lutheran Church in Okawville on August 5, 1967 and she survives his passing.

Mr. Schmidt was a 1959 graduate of Okawville High School. He served in the United States Army for two years having attained the rank of Tech Sergeant. He was a faithful member of the Immanuel Lutheran Church in Okawville where he previously had served as an Elder and as President of the congregation. He was also served on the Immanuel Lutheran School Board. Stan spent much of his life in the auto parts industry and had owned Community Auto Supply in Okawville for several years. He enjoyed attending local sporting events and he loved spending time with his granddaughter.

Stan was very active in his community. When the Village of Okawville adopted its zoning ordinance, he served on the very first zoning board. Stanley was also passionate about his work with the Lions Club. He first joined the Okawville Lions Club in February of 1968.

Through the years, he served on nearly every committee of the Okawville Lions. He was Club Secretary for 15 years and served five separate terms as Lions Club President. In 2009-2010 Stan served as District Governor for Illinois Lions District 1-CN. Stan founded and chaired the SPOT Program for District 1-CN. Its mission was to provide no-cost vision screenings at schools all through the district. Stan spent many hours traveling from school to school to provide this valuable service.

Stan received many honors and awards from the Lions Club, including the Perfect Attendance Award for 46 consecutive years of perfect attendance, the Lions of Illinois Foundation Fellowship and the Melvin Jones Fellowship. In February of 2018, Stanley received his 50 year Monarch Chevron Award.

Left to mourn his passing is his wife, Cora of Okawville; a daughter, Karen Lynn Owens and husband Doug of Champaign, IL; a son, Daniel Schmidt and wife Rachel of O’Fallon, IL; one granddaughter, Hanna Schmidt of O’Fallon; five nieces, one nephew, several great nieces, great nephews, cousins and a host of friends.

In addition to his parents, he was preceded in death by a sister, Shirley Brinkerhoff.

In lieu of flowers, memorials may be made to the Okawville Lions Club or to the Immanuel Lutheran Cemetery and will be accepted by the Campagna Funeral Home.