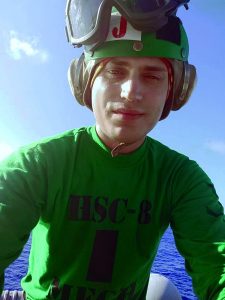 Nicholas Everding of the U.S. Navy.

The close proximity to other crewman put Nicholas Everding at risk when COVID 19 spread through the USS Theodore Roosevelt.

Like many of his shipmates, he contracted the virus. The Okawville High graduate reported he has only minor symptoms.

The naval carrier was deployed to Guam in January. When it arrived in early February, Everding said they began learning of corona virus. They stayed in Guam five days, and then left for Vietnam, arriving in early March. The USS Roosevelt was only the second carrier in 42 years to port in Vietnam.

After four days in Vietnam, sailors were in quarantine for 14 days for safety. On the 14th day, the first sailor tested positive, Everding said. That was followed by two more the next day. While in the middle of the Philippine Sea, more than thirty tested positive within a week. “It kept progressing and spreading from there,” Everding said.