Her basketball team won a sectional championship, and Michelle Hasheider-Burianek was named IBCA Coach of the Year. Not bad for someone fighting a much bigger battle.

Despite battling cancer all year after a diagnosis last summer, Hasheider-Burianek was able to put together a postseason run to the Lady Rockets’ first super-sectional gam 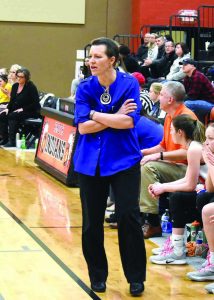 e in more than a decade.

“It’s a great honor, but I feel that I got it because of everyone else’s hard work,” she said of the award. “It really belongs to everyone.”

What Hasheider-Burianek should be less modest about is her main battle. She says that she is in a good place in her cancer treatments.

“I’m feeling good right now,” she said. “The doctors have been pushing my appointments back because of the Coronavirus, but I think it’s encouraging that they don’t feel the appointments are necessary.”

On the basketball floor, Hasheider-Burianek was pleased with the way the team played. After some early struggles, things came together at the right time for the green squad.

“We were pretty young, so we took our lumps early,” she said of her team, which relied on underclassmen for substantial minutes. “When you go from middle school to varsity basketball, it’s a big jump.”

Hasheider-Burianek credits the leadership of her seniors in showing the younger players what it takes to be successful at the high school level.

“One good thing about having a young team, it means things are looking good for the future,” Hasheider-Burianek said.

After a winter of battling both cancer and opponents, both the Lady Rockets’ and their coach’s futures are looking bright.