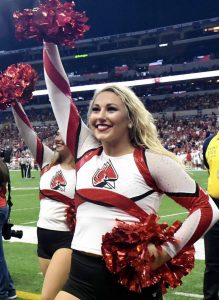 Nealey Ritzel’s dancing journey that started at age three has some to a milestone 19 years later. She has had her last performance with the Code Red Dance team at Ball State University in Muncie, Indiana.

When her Tracey Ritzel enrolled her daughter in a tap and ballet class, she thought it might be some fun girl time for the two of them. She didn’t know at the time where that introduction to dance would eventually lead her daughter.

“After training and competing for fifteen years, I wasn’t ready to let it go,” said Nealey Ritzel.

She was nervous – despite years dancing in competitions and recitals. “I arrived at Worthen Arena a little nervous but with one goal in mind,” said Ritzel. “I would leave here today a member of this team.” And that she did…

Unfortunately, Ritzel’s career on Code Red was cut short this season due to the COVID-19 pandemic.  The final conference tournament appearance and senior nationals in Daytona were canceled.

“I wouldn’t change a thing about the last four years of my life. Code Red made a huge impact on me and my dancing career,” Ritzel said. “I made connections with some of the industry’s best, had opportunities I never imagined, made my best friends. But most importantly, Ball State helped shape me for my future plans” Ritzel said.  “I am so thankful I was given this lucky chance four years ago.”

Besides Code Red, Ritzel was busy in the classroom, opening doors to opportunities to build her resume and professional image. She was an active member of Pi Sigma Epsilon, a professional business fraternity, while keeping busy dancing for Outlet, a strictly hip hop dance troupe on campus.

Ritzel will graduate in May with a Bachelor of Science in Marketing and a minor in Digital Media.

Pick up this week’s issue to read the full story.