With both the state tournament and the conference tournament canceled due to the coronavirus outbreak, the Okawville Junior Lady Rockets volleyball team ended their season with two wins in three matches last week. 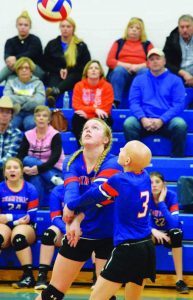 In the Lebanon match, Addison Wiechert had six kills. Wienstroer had 12 digs and eight points on serve. Kylie Going had five assists and seven digs.

The Junior Lady Rockets played right with the top team in the conference during the final game of the regular season against All Saints. Wienstroer had 21 digs and six kills. Harre had 25 digs. Wiechert had three kills and three blocks. Going had nine digs and five assists. Lexy Borrenpohl had six digs and five points on serve.

The team improved as the season progressed, finishing with a record of 11-13. The players on the basketball team missed three weeks of practice and four matches at the beginning of the season. The late start contributed to an early record of 2-9. However, they finished the season with a 9-4 record in their last 13 matches.