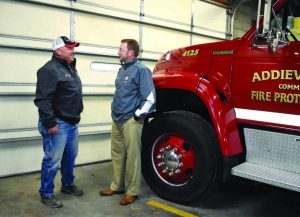 Voters in and around Addieville will decide whether to approve a bond issue for construction of a new fire station for the Addieville Fire Protection District.

The Addieville Community Fire Protection District Board approved a bond referendum for the March 17 primary election. The bond will be in the amount of $1.4 million over a 20-year term.

Addieville Fire Chief Ryan Wiedwilt says the department has outgrown its current building, which has served as the fire station for more than 50 years. The building is constrained on four sides, which does not allow for building on the current site.

“The current firehouse is grossly undersized,” Wiedwilt said. “We have very little room for storage, and the trucks have to be parked at an angle just to fit inside.

“Conducting meetings and trainings must be done by parking the trucks outside, even during inclement weather to have the necessary room,” he continued. “We’ve also had to look for alternative locations around the community.”

That lack of space makes the volunteer firefighters’ jobs harder, Wiedwilt said. “We can’t do maintenance on one of the trucks without opening the garage door, and if we want to get our brush truck out we have to move other trucks in and out of the building first, which adds to the response time.”

Kremmer Hired to Teach Much Closer to Home