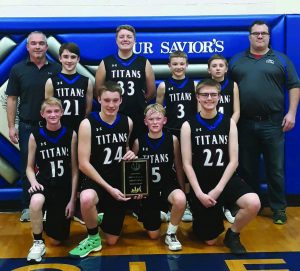 The Titans won the opener by a score of 48-28 over Concordia-Peoria.

Ethan Pinski led a balanced attack for the Titans with 17 points. Parker Renken (11) and John Blumhorst (10) also finished in double figures. Connor Davis had four points, and Zach Brinkmann, Will Diedrich and Houston Fark each had two points.

In the second game, it was ILS/TSJ over Bethel-Morton by a score of 44-32.

The Titans beat Trinity-Stewardson 46-36 to win the championship in Springfield.

Blumhorst poured in 20 points to lead ILS/TSJ. Renken finished with 13, Pinski added ten, Brinkmann went for two points and Diedrich chipped in one point in the championship game.