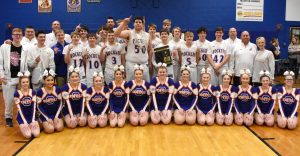 The Okawville Rockets survived a pair of tough games to win a sixth straight regional championship in Steeleville.

On Wednesday night the Rockets returned to regional action to play the host Steeleville Warriors in what would be a very tough test on the Warriors home court.

The Rockets and Warriors went back and forth most of the first half, but Rockets were leading at halftime

Marissa returned a large portion of their team from last year and proved to be a very tough opponent, but Okawville never looked back as the Rockets controlled the game from the tip.

The Meteors made that run early, cutting Okawville’s lead to nine points, but that would be as close as they would get. The Rockets spread the floor and Marissa had a very tough time containing Okawville in the Rockets 52-33 win.

With the win, the Rockets advance to the Norris City Sectional on Wednesday night at 7 p.m. to face Goreville.

Full game highlights and stats in this week’s issue.