A stolen truck was used as a battering ram in a theft at Holzhauer’s Auto and Motorsports in Nashville early Monday morning.

The truck, which was stolen from Missouri, crashed through a fence at the dealership during the theft of three motorcycles.

Surveillance camera footage showed the truck crashing through the barrier just after midnight on Sunday. Within minutes, three suspects sped away north on State Route 127 on the stolen sport bikes.

The three people captured on video were wearing helmets, gloves, and long sleeves, so they could not be identified.

According to police, similar incidents have been reported at other dealerships in the St. Louis area. The investigation is ongoing. Stay tuned for updates. 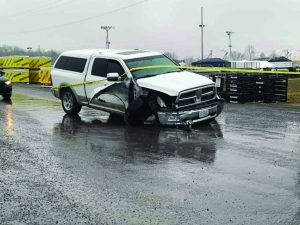