The Okawville Rockets returned to action on Tuesday to play host to the New Athens Yellowjackets. The Rockets defended their home court with a 64-47 win.

Okawville got off to a quick start outscoring New Athens 16-7 after the first quarter. The Rockets kept the pressure up in the second quarter allowing only six points to lead 29-13 at the break.

On Friday night the Rockets hit the road to take on the Red Bud and beat the Musketeers 61-40.

Okawville played some good offense in the first quarter scoring 17 points but the defense allowed 13. Red Bud hung around the entire first half and Okawville’s lead going into the second half was 30-22.

The Rockets needed to play better defense in the second half and did. Okawville began the second half with a big run, forcing Red Bud into some turnovers. The Rockets outscored the Musketeers 21-6 and grabbed a 51-28 lead after three quarters, and Okawville maintained the cushion the rest of the night winning 61-40.

Meyer led the offense with 15 points, and Frederking and Kolweier both finished with ten. Parsley tipped in eight points, Unverfehrt and Heckert had six apiece, Harre had four and Daniel Jansen went for two points.

The Rockets are now 17-8 on the season and returned home for Senior Night on Tuesday against the Sparta Bulldogs.

Okawville will finish up the regular season with a very difficult road test at Breese Central this Friday. 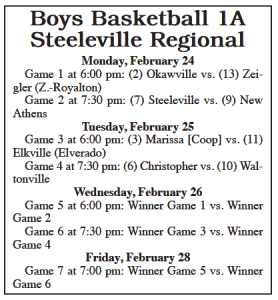 The Rockets will begin postseason play at the Steeleville Regional Monday at 6 p.m.