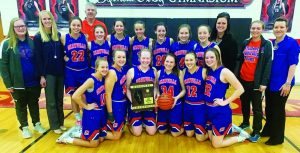 The Okawville Lady Rockets added some hardware to the school’s trophy case by winning the Class 1A Albion Regional last week. Beating Gibault and Woodlawn. Full game details and stats are in this week’s issue.

The Lady Rocket defense came to play against Gallatin County in the first round of the Wayne City Sectional Monday. Gallatin scored 70 points in their regional championship game, but the Lady Rockets held them to just 28 in the Sectional game.

Fueled by six first quarter points by Tebbe and four from Toensing, the Lady Rockets took an early lead in the contest and held on tight to coast to 26-10 half time score.

Rhodes and Schleifer both hit three pointers in second quarter. Okawville did a nice job of controlling the boards and forcing the pace of the game to fuel fast break buckets by both Rennegarbe and Rhodes.

Tebbe led all rebounders with ten and played an exceptional contest, scoring 16 points for a double-double.

Coach Michelle Hasheider-Burianek said she was just so proud of the tremendous team effort.

“Each player executed her role exceptionally. The bench players came in and gave valuable minutes and it showed the unselfish, team-first attitude of this great group of young ladies,” she said.

Okawville will move on the Wayne City Sectional Championship game on Thursday against the winner of the Goreville/Marissa-Coulterville Coop contest. The winner of the sectional championship will advance to the Farina Super-Sectional Monday at 7 p.m.

Senior Megan Schleifer was one of four athletes to advance out of the three point contest at the Albion Regional. She will again shoot on Thursday, February 20 at 5:30 at the Wayne City Sectional. Others competing in the contest were Grace Foster, Delaney Toensing and Chloe Kraus.