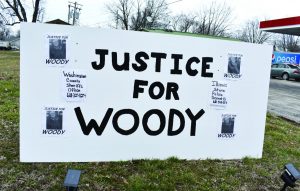 Who would kill a senior citizen who lived alone? Is the suspect in the area? Are others in danger?

Those are questions residents of Ashley have had since the body of David Woodrome, 71, was found just inside his door Sunday, February 9th.

A county deputy told the Ashley City Board at its meeting Monday that it would have more frequent patrolling in the town.

In an effort to find the killer, an Ashley resident who does not want to be identified put up a sign “Justice for Woody” with the numbers for the Sheriff Department and State Police near the Popeck’s Phillips 66. Fliers with Woodrome’s photo hang on poles along Route 15.

The man said that he did it to pay homage to Woodrome, bring awareness to the crime, and encourage anyone with information to contact the police.

“It’s a very stressful time for us because we don’t know anything,” he said. “We are scared. This is a big-city crime in a cornfield. Nobody knows how to cope. People are locking their doors and not letting their kids play outside.”

He said that thinks people should get to know their neighbors, and report anything suspicious.

Fear for safety was expressed by others.

“We aren’t being told anything,” said one resident who doesn’t want to be identified. “I am afraid now. We lock our doors,” she said.

“I am very concerned for my safety,” said another resident. “If you are not concerned, you are foolish.”

Read the full article in this week’s issue…