Raelynn Obermeier of the Immanuel Lutheran/Trinity-St. John Lady Titans was honored for scoring her 1,000th career point during her junior high career.

Obermeier reached the milestone during the third quarter of the SIJHSAA State Semifinal game against New Simpson Hill. 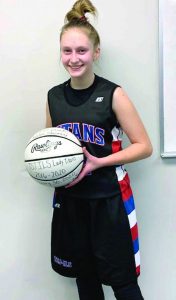