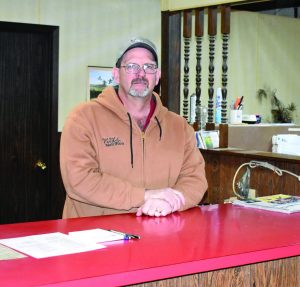 A Hoyleton business that Curtis Kuhlengel operated for nearly fifty years before his death a year ago now has a new owner.
Mike Henry of the Waterloo-Red Bud area purchased Hoyleton Feed and Garage Repair on W. Main St. from Kuhlengel’s estate.

Kuhlengel had approached Henry about buying the business several years ago, Henry said. “At the time I had just bought the Red Bud Feed Store, and I wanted to get established in that business first,” he said.
“Curt put a lot into this business to give it a good foundation,” Henry said as a tribute to the former owner.

The new business owner said that he will continue the service of mixing grain for livestock feed and storage  in its 62,000 bushel storage capacity.
Henry also plans to make food for horses and pets. He will upgrade the front of the building to display pet food and start selling other pet care products.
One change in the Hoyleton business is that it will no longer sell gas.