With vaping-related illnesses popping up in the headlines over the last few months, students and staff at Okawville Junior-Senior High School are trying to keep students safe.

Though no one at school has reported any ill effects from vaping, students say that vaping is not at all uncommon at Okawville.

“I see people doing it every day, even at school,” said Kole Jackson. “Usually it’s in the parking lot, but I’ve even seen kids vaping in the bathroom.” 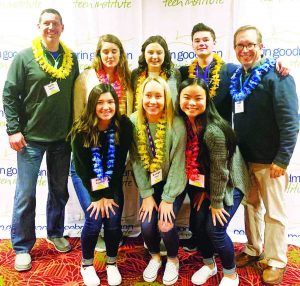 E-cigarettes, also known as vapers and vape pens, are small enough to be easily concealed and can look like a computer thumb drive.

Vape pens heat a liquid solution into a vapor, which users then inhale. The vaping liquids contain nicotine and other substances and are often flavored. Since no tobacco is burned, no tell tale smell of smoke is produced.

In addition to being easier to hide, the fact that vape liquids are often flavored make it problematic for underage users.

“I think a lot of kids think it’s okay to do because it tastes like bubblegum or a fruit flavor,” said student Scotty Coon.

Alyssa Gavin said that it is not just the flavoring that make vaping more attractive to young people. “People have told me that they think it’s less addictive than smoking cigarettes, but it’s still nicotine,” she said.

The students feel that education is the key to the battle against vaping, which is recently spiked in popularity through ads and social media influence.

“A lot of parents don’t know anything about vaping, so they don’t talk to kids about it,” said Bryleigh Prest. “That’s why we’re trying to reach our peers with the information.”

With that in mind, the Student Leadership Team has taken to providing information on vaping through posters in the halls, in bathrooms and on bulletin boards, as well as peer to peer contact.

“We’re trying to reach out to kids as much as we can, but obviously it will take more than that to stop the problem,” Zoe Todd said.

The Student Leadership Team thinks that the Illinois legislature upping the age to buy tobacco products from 18 to 21 could help. “It’s easier for a high school kids to find someone who is 18 to buy it for them  than finding someone who is 21,” said Jackson.

The legislature is also considering banning the flavored vaping liquids, which might make vaping a bit less attractive to teens.

All of those efforts are steps in the right direction, but vaping is not going away right now. The Student Leadership Team knows that.

“I think the best we can do is maybe keep younger kids from trying it, but the people who want to keep doing it will,” said Lindsey Averbeck.

The students are doing their best to make sure that none of the bad outcomes tied to vaping happen at Okawville. But they are realistic about what could happen.

“I’m afraid that it will take someone getting sick to make people see the dangers of vaping, and it’s sad that I have to say that,” said Prest.