Few things are more painful than seeing the effects of dementia on a loved one. Amy Stevens is trying to do something about it. 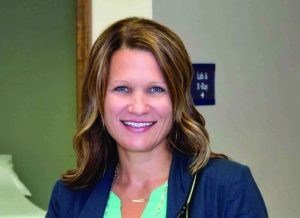 Stevens, a physician assistant from Nashville, is offering Cognitive Stimulation Therapy, a treatment program for patients with dementia.

The evidence-based program stimulates the mind by focusing on five functions of the brain: language and music, visual/spatial orientation, memory, critical thinking and computation.

“The activities have been shown to increase brain cells and their connections, helping to route around parts of the brain affected by the disease,” Stevens explained. “It’s like strengthening a muscle around an injured joint.”

After nearly 18 years as a Primary Care PA, Stevens first became interested in CST after visiting her 98-year-old grandmother in Florida. It was there she realized that treating dementia was something she wanted to do.

“I was in Florida with my grandmother, who was still sharp as a tack until she died, when I started thinking about looking into CST,” she said. “I reached out to the CEO of Fit Minds, Janet Knupp, and talked to her about her program.”

Stevens said she had heard about the treatment, and that Florida was the first state to offer the treatment. It had been used in other countries, but Knupp’s Fit Minds program was one of the few in the United States.

Knupp, the CEO of Fit Minds, started the program after her mother was diagnosed with Lewy Body, a form of dementia. Stevens said after talking to Knupp, she decided to use the Fit Minds platform in her treatments.

“I’ve seen a lot of people who have been in different stages of dementia, and I really thought this program could help them,” she said.

The program can be done in either one-on-one or group settings, though Stevens said she has seen the best results with the more personal one-on-one option.

“It’s customizable to each person based upon how they score in each of the different brain functions we’re trying to stimulate,” she explained.

Stevens said she just recently began presenting in a group setting at Friendship Manor Healthcare in Nashville. She said she is amazed at what she has seen in her work with patients.

Steven said she asked one woman if she danced, and the patient said she did not.

“I put on some music and stood up with her and showed her a polka steps, and then she remembered and started dancing,” Stevens said. “Music is very powerful with memory, and it was great to see her dancing like that.”

As Stevens continues her CST work with patients, she says she plans to include another dimension to the sessions: prayer.

“Prayer is also a special part of our sessions, as we end each one-on-one session with a prayer, and I plan on starting this with group sessions as well,” she said. “The research shows the power of prayer and its benefits for longer, happier lives, and it has certainly made all the difference in my life personally.”