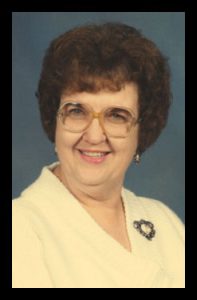 Ms. Peggy A. Reinkensmeier of Nashville, IL departed this at Friendship Manor Healthcare Center in Nashville, IL on Saturday, January 25, 2020 at 11:12 AM.  She had attained the age of 82 years, 2 months and 26 days.

Peggy resided in Nashville, IL since her marriage, working for Gem Transfer and Freeburg Transfer.  She worked for DeFend’s Garage, Inc. for 22 years, until her retirement in September 2007.  Peggy enjoyed spending time with her grandchildren, reading and watching the St. Louis Caridnals.

Funeral services will be held at the Trinity Lutheran Church in Nashville, IL on Wednesday, January 29, 2020 at 11 AM with Rev. James Miller and Rev. Aaron Kotila officiating.  Interment will follow in the church cemetery.

Friends may call at the Trinity Lutheran Church in Nashville, IL on Wednesday from 9:30 AM until the service hour.

Should friends desire, memorials may be made to the Trinity Lutheran Church and will be accepted by the Campagna Funeral Home, who is assisting the family with arrangements.

Online expressions of sympathy can be made to the www.campagnafuneralhomes.com.