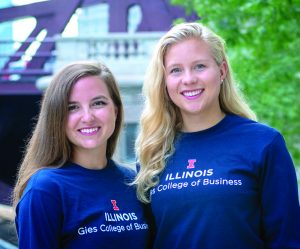 Elizabeth Engele (left) of Nashville and her college friend Julia Haried of Chicago were named to the Forbes 30 Under 30 list for co-founding MakerGirl.

MakerGirl, a not-for-profit that educates girls ages seven to ten in Science, Technology, Engineering, and Math (STEM) through 3D printing workshops, has announced that two of its co-founders, Julia Haried and Elizabeth Engele, have been named on the Forbes “30 Under 30.”

Engele, a 2011 graduate of Nashville High School, responded, “It is humbling to be recognized in this list of esteemed leaders. Our past and future accomplishments are possible through the big dreaming and resilience of our ChangeMaker team as well as the support and investments of our beloved friends and family.”

Read the full article on the honor in this week’s issue.