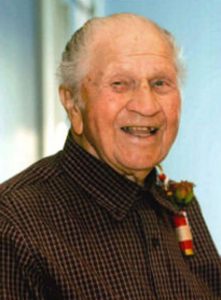 Mr. George Michael Nadolski of Ashley, IL, departed this life at Washington County Hospital Extended Care in Nashville, IL on Wednesday, November 20, 2019 at 3:02 PM.  He had attained the age of 94 years, 8 months and 17 days.

George was born on March 3, 1925 in Jefferson County, IL, the son of Michael and Rose (nee Ceglinski) Nadolski.  He was united in marriage to Rita Rynski on June 21, 1952 and they later divorced.

George worked as a dairy farmer and was very proud of his Registered Milking Shorthorn Cattle.  He showed these cattle at various county fairs for 52 years.  Membership was held for years in the Illinois Milking Shorthorn Society.  DHIA testing was done to improve milk production records and butter fat, along with breeding for good show cattle.  He was a member of the DuBois Knights of Columbus, Washington County Farm Bureau and he served on the Washington County Fair Board as a Director for many years.   He also served as one of the first school board members for St. Michael Catholic School in Radom, IL.

Mass of Christian Burial will be celebrated at 10 AM on Monday, November 25, 2019 at St. Michael Catholic Church in Radom, IL with Fr. Oliver Nwachukwu officiating.  Interment will follow in the church cemetery.

Friends may call at the Campagna Funeral Home in Ashley, IL on Sunday from 4 PM until 7:30 PM and on Monday from 8 AM until 9:30 AM.

The rosary will be recited at the Campagna Funeral Home in Ashley on Sunday at 7:30 PM.