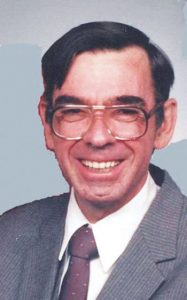 David was born in Battle Creek, MI on August 9, 1936 the son of James R. and Sarah (nee McCrumb) Meeker. He was united in marriage to Eleanor Roger and she preceded him in death.

Mr. Meeker worked as a Bible salesman until his retirement. He was a member of the Seventh Day Adventist Church in Collinsville, IL. Mr. Meeker was an avid plant enthusiast and operated a small greenhouse at his home. He also had a great love of animals. David was a man of faith and enjoyed reading his Bible daily.

Left to mourn his passing is two sons, Joe Walston of Okawville and Tim Walston and wife Buffy of Missouri.

In addition to his wife, he was preceded in death by his parents.

Funeral services will be held from the Campagna Funeral Home in Okawville on Friday, November 8, 2019 at 3 P.M. Interment will be in the I.O.O.F. Cemetery in Okawville.

Friends may call at the Campagna Funeral Home in Okawville on Friday from 1 P.M. until the time of the service.

In lieu of flowers, memorials may be made to the family of David Lee Meeker and will be accepted by the Campagna Funeral Home.