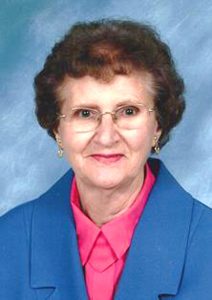 Ruth loved sewing and worked in the garment industry as a seamstress for over 52 years, finally retiring from S.A.S.I. Corporation/Bridal Originals in Collinsville, IL. She was a proud member of the Union of Needletrades, Industrial Textile Employees, Unite, Union Local #74, AFL-CIO in St. Louis, MO. She was a member of the St. Barbara Catholic Church in Okawville where she was a member of the St. Barbara Altar Sodality. Ruth was an avid gardener and loved growing flowers, and was always ready to play a hard game of Pinochle with anyone who was up to the challenge.

Mass of Christian Burial will be celebrated from the St. Barbara Catholic Church in Okawville on Thursday, October 31, 2019 at 10 A.M. with Fr. Tad Gegotek officiating. Interment will be in the church cemetery.

In lieu of flowers, Mass offerings or memorials may be made to the charity of the donor’s choice and will be accepted by the Campagna Funeral Home.