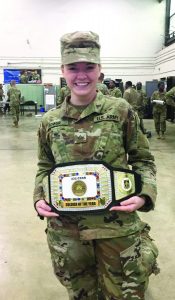 Queen Jaylyn Bower and her most recent trophy, Soldier of the Year.

Add Soldier of the Year to the list of accomplishments for Washington County Fair Queen Jaylyn Bower.

Representing the 1844th Transportation Company of the Illinois National Guard, Bower was chosen from among nine soldiers as the 242nd Combat Sustainment Support Battalion Soldier of the Year.

The contest consisted of a written exam, an essay, weapons qualification, physical fitness test, a ruck march, tests on drill and ceremony, and an interview with the battalion appearance board.

“I did a lot of studying,” PFC Bower said of her preparation for the contest. “I was pretty confident that I’d do well in the physical stuff, since I ran cross country and try to stay in good condition.”

Bower competed against nine other soldiers, all male, for the honor during the competition held last weekend. She advanced to compete in the brigade-level event in two weeks.