Decades of “common knowledge” that ghosts haunt The Original Springs Hotel have evaporated in ectoplasm.

“Ghost Hunter” investigators Grant Wilson, Kristen Luman, and Brandon Alvis spent several days at the Hotel in June. The Hotel closed during their stay so that the television crew could have uninterrupted access to the entire building. They set up equipment for detecting paranormal activity in the bath house, dining room, and guest room 350. Guests have previously reported feeling ghosts in the room, where a suicide occurred. The investigation was conducted at night with lights off.

Although no “official” ghosts were recorded by the show, residents, former guests, and especially workers still believe in the local lore of the “lady in white” and other spirits of the century-plus-old hotel. 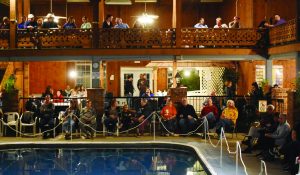 “The dining room was full, the pool area was full, and the Steam Pipe Lounge was full of people,” Rennegarbe said about the Ghost Hunters watch party held at the hotel.

Read more on about the show, staff experiences and the after-show tours given by hotel employees in this week’s issue.