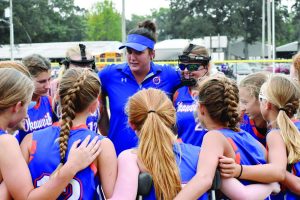 Coach Haylee Althoff huddles with her team for the final time before the game.

Though they played in the final game of the season for the first time, the Okawville Junior Lady Rockets’ season came up just short of winning the school’s first championship in softball.

Trico made the Junior Lady Rockets settle for state runner-up by beating Okawville 9-0 Thursday at the Class M State Tournament.

“Even though the ending wasn’t exactly what we were looking for, the girls made history being the first Okawville Junior High softball team to play in a State Championship game,” coach Haylee Althoff said after the loss.

Read full details on the Championship game and more photos in this week’s issue.