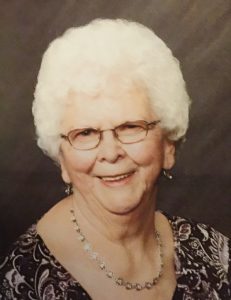 She married Orville Lilienkamp on April 9, 1950 in Hoyleton and he passed away on November 5, 1999. Also preceding her in death were her parents; three brothers, Harry, Roy and Walter Hongsermeier; and two sisters in infancy, Deloris and Betty Hongsermeier.

Dorothy retired from Little Fuse in Centralia. She started the Washington Girl Scout council in 1969 and enjoyed sewing, painting and doing crafts.

Graveside services were held at 11:00 a.m. on Saturday, October 12, 2019 at Friedens UCC Cemetery in Irvington with Rev. Mark Mitchell officiating. Friends called from 5:00 to 7:00 p.m. on Friday at the Styninger Funeral & Cremation Chapel in Hoyleton. Memorial contributions may be made to Alzheimer’s Research.

Online expressions of sympathy may be made at www.styningerfuneralhomes.com or on the funeral home Facebook page.