The Okawville Lady Rockets are the champions of the 2019 Trico Tournament, winning the round robin tourney with a 5-0 record. 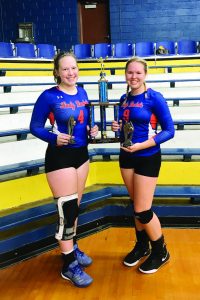 Their next match is at home Thursday, October 3 against Red Bud. It will be the “Pink Out” to honor Lady Rocket basketball coach Michelle Hasheider-Burianek.

Pink t-shirts were sold in advance, and raffle tickets for lottery tickets are being sold to benefit Hasheider-Burianek, who is being treated for breast cancer.

On Monday, October 7, the Lady Rockets play at Christ Our Rock. On Tuesday, October 8 they play at home against Valmeyer.