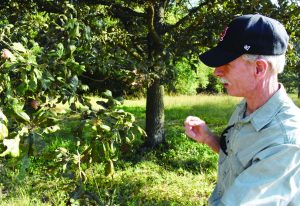 If trees could tell stories, then old trees would have the most stories, and one of the best storytellers of them all would be in Washington County.

The state record post oak tree resides in a pasture just east of Nashville. When it was measured in 2013, it had a 65-inch diameter, a circumference of 17 feet, and stood 75 feet tall.

Biologists estimate that the old tree has been growing for nearly 200 years. Illinois became a state in 1818, which means the tree is almost as old as the state in which it has been growing.

That tree has been telling a type of story to researchers over the last few years, and it is not a happy story.

Marty Kemper, a biologist retired from the Illinois Department of Natural Resources, has been coaxing a story out of the old tree. He hopes the story it is telling may help save it’s life.

For the last several years, Kemper and a conservation group called the Prairie Rivers Network has been gathering date on herbicide drift, which they say is affecting a wide range of trees in agricultural areas like Washington County.