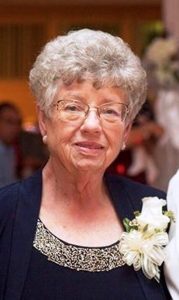 Dolores was born at Centralia, IL on September 18, 1942 the daughter of Theodore and Elverda (nee Meyer) Ostendorf. She was baptized and confirmed in the St. Peter United Church of Christ in Okawville. She was united in marriage to Tyrone Heberer in St Peter’s church on June 17, 1961 and he survives her passing.

Mrs. Heberer was a 1960 graduate of Okawville High School. She worked as a dietary aid at the Washington County Hospital in Nashville, IL for 28 years until her retirement. Dolores was a faithful member of the St. Peter United Church of Christ where she was an active member of the St. Peter’s Women’s Guild, and had formerly taught Sunday School. She was a volunteer at the Irvington Food Pantry and had previously delivered Christmas gifts to kids at the children’s homes in Hoyleton and East St. Louis, IL. Dolores enjoyed cooking and traveling, especially to the beach and loved playing cards and games with her friends. She was also an avid fan of the Okawville Rockets sports teams.

In addition to her parents, she was preceded in death by a brother, Ronald Ostendorf; a sister in infancy; her stepfather, Rufus Kuhlengel; father-in-law and mother-in-law, William and Pearl (nee Garbs) Heberer; and dear friends, Wayne and Peggy Hackstadt.

Funeral services will be held from the St. Peter United Church of Christ in Okawville on Friday, September 20, 2019 at 11 A.M. with Pastor Jeffrey Schwab officiating. Interment will be in the church cemetery.

Friends may call at the St. Peter United Church of Christ on Thursday from 4 P.M. until 8 P.M. and on Friday from 8 A.M. until the service hour.

In lieu of flowers, memorials may be made to the St. Peter’s Choir Robe Fund, St. Peter’s Sunday School Program or to Heartland Hospice and will be accepted by the Campagna Funeral Home.